Throughout his long bodybuilding career Dave Hughes has always been somewhat of an underdog. He was the guy who looked awesome at just about every show he did, consistently breaking into the top 6 of some of the most talented lineups ever seen – but constantly falling just short of earning a coveted IFBB pro card. That said, he was still extremely popular in the sport – constantly in demand for photo shoots, magazine articles and endorsement contracts. I myself was a big fan of his, as I admired his density and thickness, coupled with granite hard conditioning. Little did I know that one day I would not only meet him, but also train him – and more importantly form a real friendship.

While I mentioned that Dave has always been an underdog, one thing he has NEVER been is a QUITTER. After overcoming all kind of obstacles and adversities, Dave finally did win his pro card at the (masters) North American Champions in late 2019 at the age of 53! I recently sat down with him for a short interview, which I’d like to share with GASP readers. 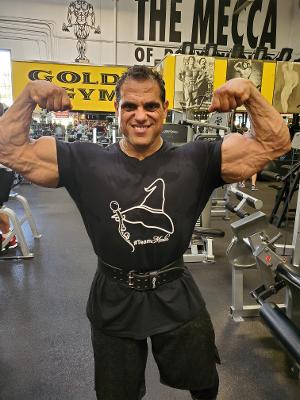 Eric: Let me take this time to once again to congratulate you on finally becoming one of the elite in the sport! How did it feel to finally win your pro card?

Dave: Finally winning and receiving my pro card was such an amazing feeling! Almost surreal to tell you the truth! It has been a goal of mine since 1989. It seriously was a very long but also joyful journey! All the places I was able to visit and the amazing people I met were always such a great experience! Guest posing, traveling and doing what I loved for so many years was priceless. But there was always one piece of unfinished business that left me feeling dissatisfied, which of course was never turning pro. That is why I gave it one more shot with everything I had, and I finally accomplished my biggest goal. But I can tell, you – it has been a long, tough road.

Eric: Ok, so you did win your pro card, as you mentioned, but I know it almost never happened because at one point you actually retired from the sport – is that correct?

Dave: Yup, that is true! I had actually retired from bodybuilding in 2000 after my twins Gracie and Logyn were born. We were moving to California from Oregon and I just felt like it was time to focus more on work and raising my kids at that point in my life. However, bodybuilding was in my blood, and I got the competitive itch again three years later and jumped back onstage in 2010. My return was not as successful as I wanted it to be, as I was dealing with injuries to both knees, as well as massive hip pain. My hips especially kept me from being able to train with the kind of intensity needed to turn pro.

Eric: Let’s stop and talk about that tough road just a bit. Everyone loves a good comeback story! What obstacles did you have to overcome along this amazing journey to a pro card?

Dave: The main obstacles I had to overcome were injuries I had to both my knees and hips as I mentioned. Both of these things had a huge impact on my training, as they not only limited my exercise selection, but also my range of motion. However I always did my best to work with and around these challenges because that is just how I tick! That said there is no doubt it greatly impacted my ability to progress in improving my physique.

Eric: You eventually gave in and had hip surgery at some point, yes?

Dave: Yes, I did. After struggling with major pain from 2010 to 2017, I finally decided to go under the knife. It was a miracle for me, because for the first time in so long I was able to train legs again at near maximum intensity.

It’s really crazy when I think back on it. Those who knew me saw me get to the point of barely being able to walk let alone even consider training legs. I finally had to swallow my pride and began using a cane but still couldn’t bring myself to take it out of my car with me! When I would pull up to Gold’s Gym, Venice, it would take me like ten minutes to get from the parking lot to the front door. Those were not good times at all, but I kept telling myself it could always be worse!  And that’s what kept me going to the gym everyday, even when I had no more intentions of competing again. I just love to train and you couldn’t keep me from getting in there and grinding.

Eric: Ok, so how did you go from the hip surgery to thinking about competing again?

Dave: Well, like I said, once I finally recovered from surgery I started feeling good again. I decided to embark on a mission to rebuild my legs. I had all the confidence in the world I was going to get them back, even better than before! As I saw the improvements week after week a fire was lit, and I knew I had to get back on that stage and finish what I started.

I decided to target my comeback for 2018, even though I kind of knew that might be too early – but I just had to test myself and see where I stood. And while I did not win, I managed 3rd place, which felt like a good starting point to really go after it in 2019. I targeted the North Americans and exactly 25 years after first doing that show, I won the whole thing!

Eric: So you and I had seen each other at Gold’s for over a year without ever actually meeting. Then one day you saw me performing an unusual exercise for my shoulders, which prompted you to come over and ask me about it. Then you tried it and loved it. This was maybe a month or so before the North Americans. Shortly after, you started training with me – right up until the day before you left for your show. We then continued the partnership as soon as you returned. How did my methods differ from your own and what made you literally change your entire philosophy of training upon our meeting?

Dave: Well “Big Eric,” I was very fortunate to get some awesome workouts with you even if just for a few weeks before my competition. It was awesome timing for me. Being that close to my show, my energy was getting pretty low. You were a huge motivator, and the things that you would say while training really stayed with me throughout the week, and kept me driving hard, even when you were not around.

I tell everyone who will listen, Coach Broser is very inspirational but even more so, extremely knowledgeable - trust me!” I’ve been in this game for over 30 years, both training and competing, and have worked with some of the best in the business! I’m always trying to learn more and to pass on to others as well. What I love about your methods is that you have a very unique way of keeping the muscles guessing. You have amazing and novel ways of shocking the muscles and maximizing their full potential. The methods you taught me are unlike anything I have experienced before. It was a great experience training and learning from you and I’m looking forward to training with you again as soon as possible.

Eric: Wow Dave, thank you so much for your kind words. One more thing I want to discuss involves the hernia surgery you had a few months after winning your pro card. You and I discussed this at length in the lead up to it, but I’d like readers to know what made you finally get this done after so many years. 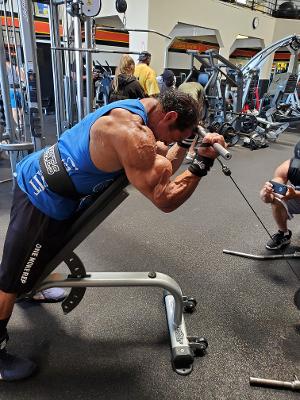 Dave: I finally decided to have a hernia repaired after years of letting it go. In the beginning it was not that bad, but slowly it started getting worse and worse until it was really an eye sore when I came back in 2018. I should have taken care it immediately after that show but I was on a new mission to get my legs better for the next year. In my mind, I couldn’t afford the downtime in order to be where I wanted to be within a year. So I opted to wait until I achieved my pro card and could relax a little with that goal achieved. Let me tell you, it was stressful though. I was very worried that the hernia would hold me back at the show- luckily it did not. But, going forward, I knew if I ever wanted to compete again – as a pro - this was a must to get fixed!

The recovery period lasted for several months. It was difficult and painful. I did not even touch a weight for about 8 weeks, and when I was allowed to go back to the gym, I had to start with extreme caution. At this point I am finally getting back into the groove and almost training at full capacity. That said, I have a lot of size I need to gain back before I even feel like myself again.

Eric: So where does Dave Hughes go from here? What are your future plans now that you achieved your dream of becoming an IFBB pro?

Dave: As of now, I’m currently working on building my online clientele and expanding my “brand.” This is what is most important at this point. I do not have any immediate plans to compete because I am not yet sure what the official IFBB schedule will be. So for now I am just trying to stay focused on training and improving – especially my legs.

But I can say that when the time comes for me to compete again I want to do it locally (Southern California) so that my family and friends can all be there with me. Sharing these moments with the people I love is what makes everything worth it.

Eric: I know you want to thank a few people, so please take this opportunity to do so.

Dave: I definitely want to thank my good friend and sometimes training partner, Francisco, for all of his help and support before my North American’s victory. He actually traveled to the show with me, which was just so awesome. I also want to thank my son Logyn, who also made the trip out to Pittsburgh with me to assist with anything I needed. We shared a very special moment back stage right after I won. He wanted to get the first picture taken with me, and right before we took the picture he pulled out an IFBB necklace that he got me right after he knew I won. When he handed it to me I could see in his eyes how proud he was of me. So it was definitely an unforgettable moment that I’ll cherish forever. Finally I must thank my beautiful woman, Cathy, who nursed me back to my feet after my double hip surgery and really supported me in whatever decision I made!

Eric: Thank you my friend for sharing all of this with me, and GASP readers. You are a true inspiration and provide us all a lesson in what the meaning of “tenacity” really is! 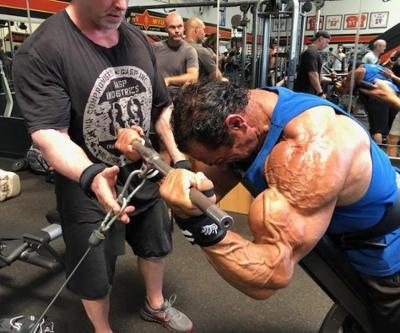