Austin Haye, a dedicated GASP ambassador with a passion for those heavy lifts competed and won the Texas Strongest Man show this past weekend. His brother Sumner Haye was also one of the competitors and Austins 2 year old son Jack was one of the biggest fans there. 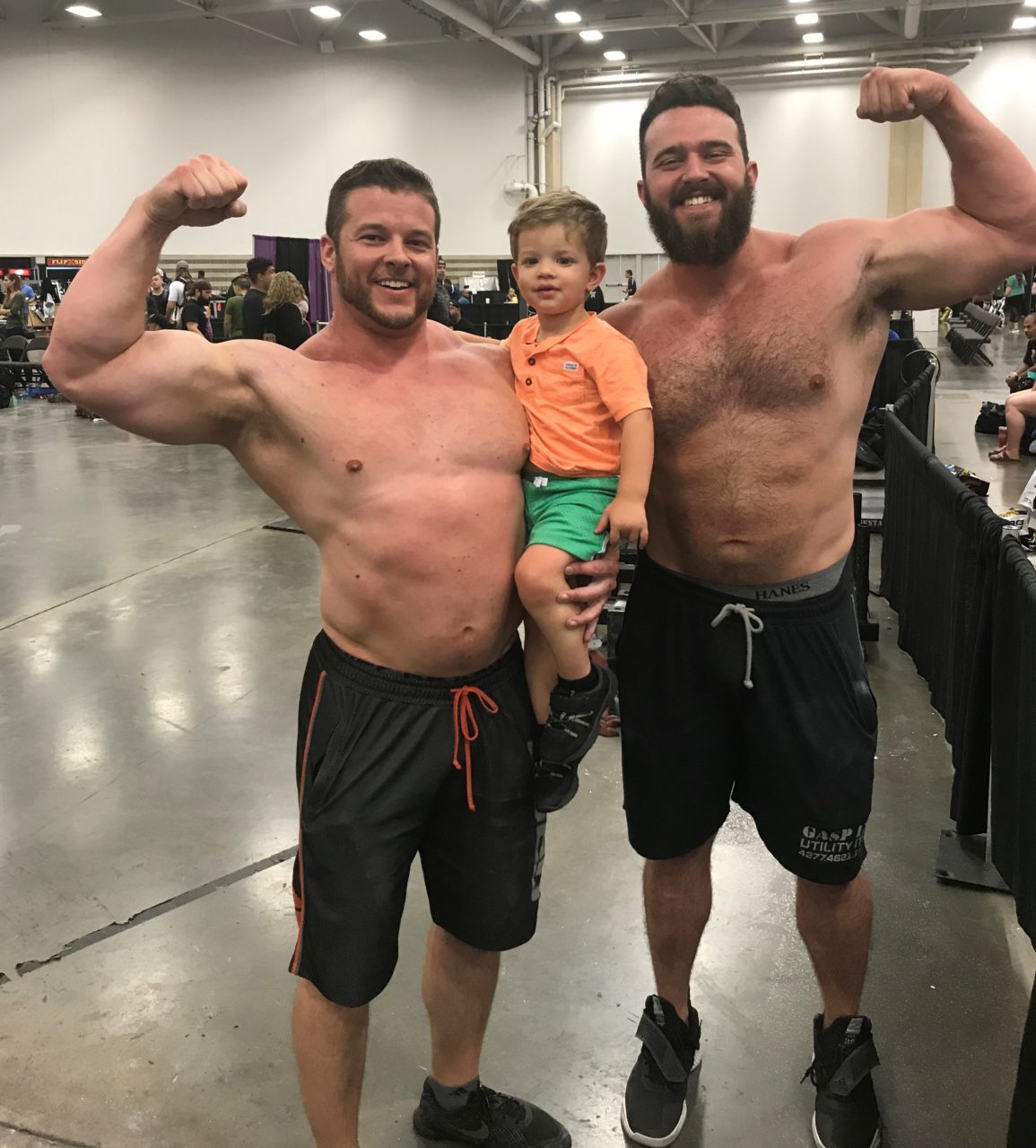 We asked Austin some questions about the show, and in particular how he felt about having his family there to support. Did having your son at the event influence your energy? Absolutely. Jack has been my biggest fan and loudest cheerleader since I first brought him to watch me compete earlier this year at the Ronnie Coleman Strongman Classic. Ever since, he’s been saying “Daddy ‘wift’ weights!” and asking me if I’m going to the gym to train with “Unkie” (his name for my younger brother and training partner, Sumner). Seeing how excited he gets to watch me workout in the gym or compete makes me want to put forth that much more effort. There’s nothing to really compare it to until you have kids and they get really involved/start participating in your hobbies. Did being a dad influence your training leading up to the event? Yes – In both positive and negative ways, but mostly positive. The time I devote to training is minimal because I don’t want to miss out on too much time at home with him. I can manage off of 3 days of training per week which comes out to about 6-7hrs/week of training time. This has actually been a really big benefit for me because it has forced me to allow my body to recover more than in the past when I was training 5-6 days a week (12-14hrs total). With more recovery I get injured a whole lot less and I don’t plateau as easily during training cycles. The only negative influence I experience, and any parent can relate, is the lack of sleep that comes with just being a dad to a 2 year old. I wouldn’t change it for the world though. How did your son help you warm up? We got to the competition floor and as soon as we set our bags down, he was tugging on me to take him out on the floor so he could see what the other strongmen were doing and play with the implements. Having to focus on him and not getting warmed up right away took the edge off at the beginning of the competition. There’s always a certain amount of nervousness that hits you as soon as you step foot on that floor and see everyone starting to warm up and get into their own competitive zone. I’m usually right there with everyone else in terms of nerves being on fire, but with Jack there I have to focus on him and making sure he’s learning and having a good time while I get ready. Having him there waiting for me on the sidelines in-between events really took the edge off things throughout the whole day because I would have to turn off the intensity and just be “daddy” again while I waited for the next event. 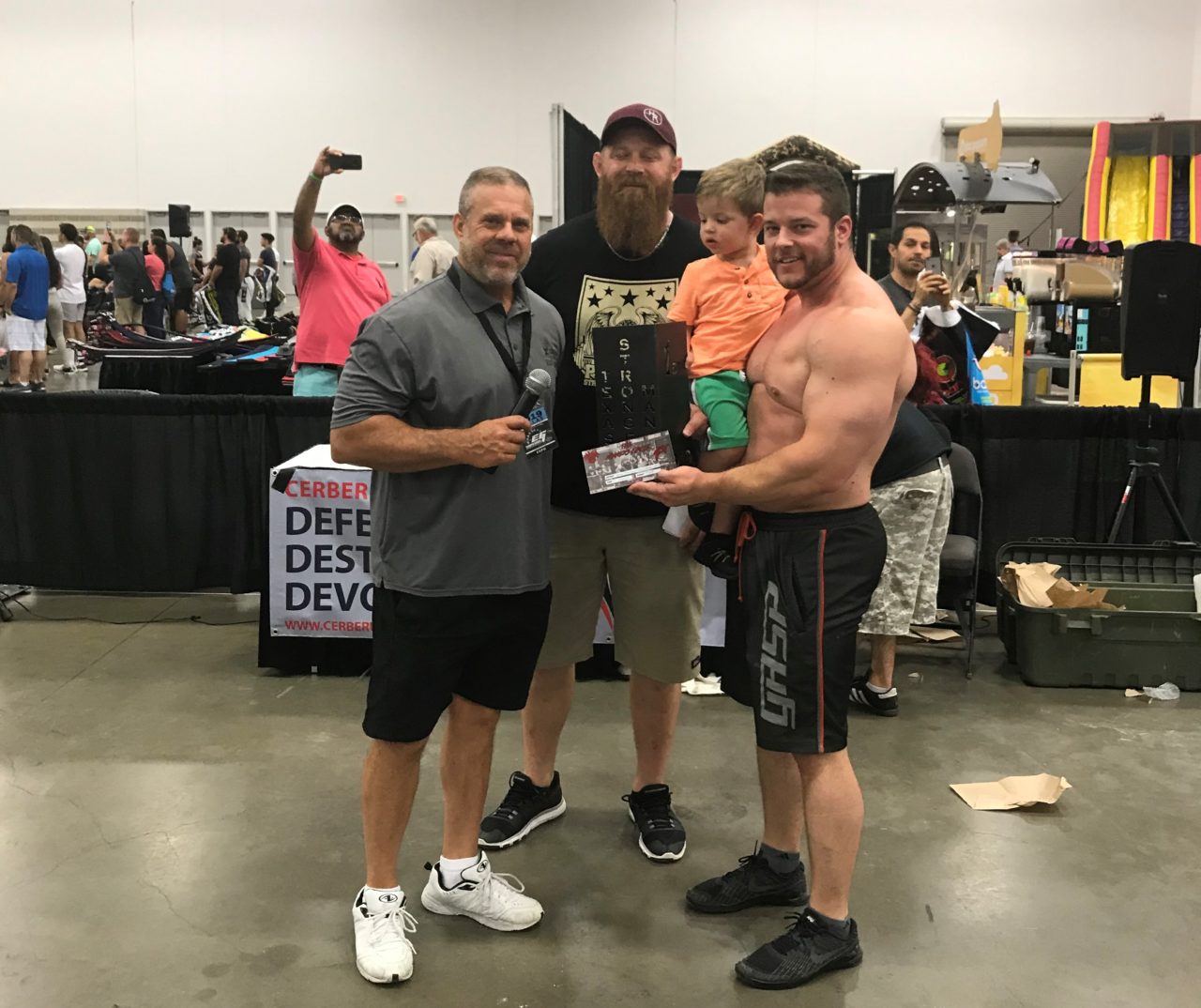 How was the atmosphere at Texas Strongest Man?  Electric to say the least. The competition took place inside of the Europa Games Fit Expo, so we had spectators on all sides watching, filming, and cheering for us. Scott Brockelman and Jacob Fincher (North American Strongman Co-State Chairs – Texas) did a great job getting strongman into this event. Other than the Bang Energy booth, we were probably the biggest draw for spectators. 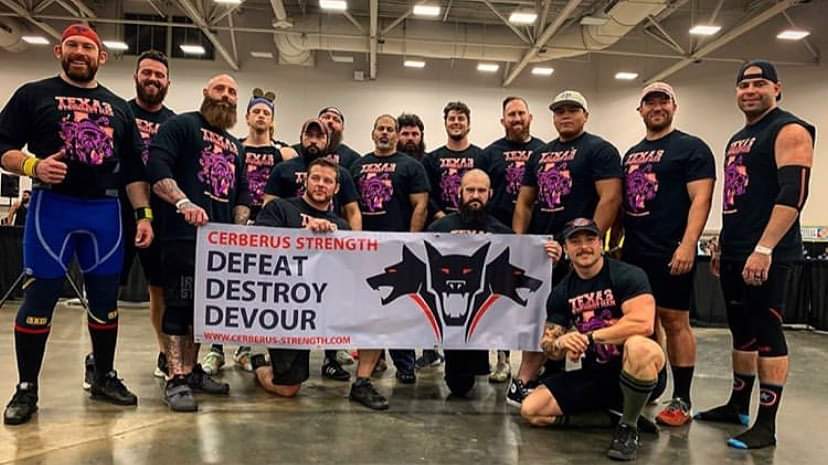 What were the events there?  The first event was the log clean a press for reps. The weight for my division was 270lbs. A lot of athletes in my division struggled with this event due to the size of the log that was used and the uneven surface we were standing on. I managed only 2 reps which put me in a 3-way tie for 1st. 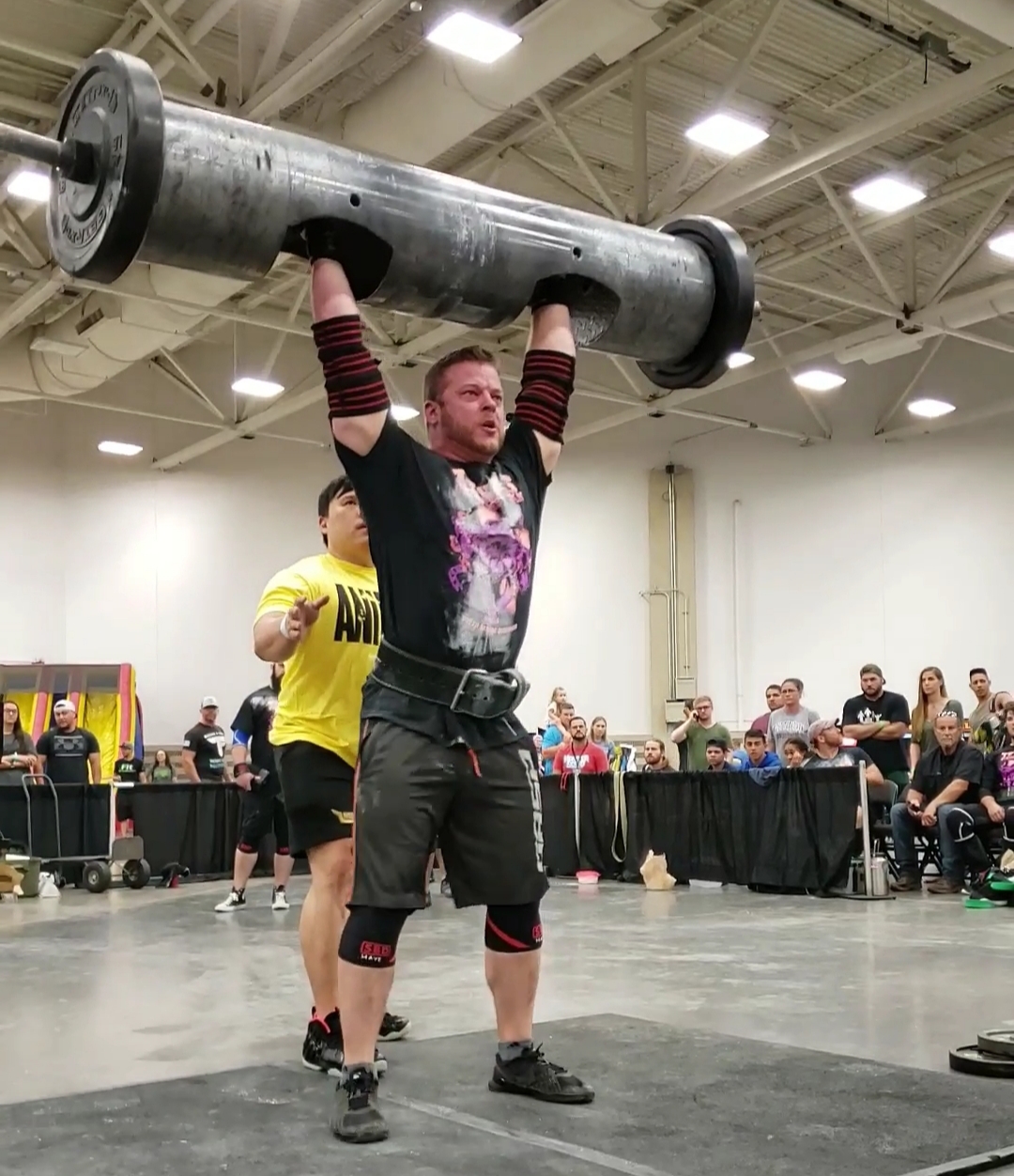 The next event was the axle deadlift for reps. The weight for my division was 565lbs and I managed 10 reps in under 60 seconds. I only needed 8 to win the event, so I stopped at 10 reps with time to spare. I believe this was a rep PR for me at this weight. I don’t get to train axle that often, so it was good to see my heavy conventional deadlifting transfer over like that. 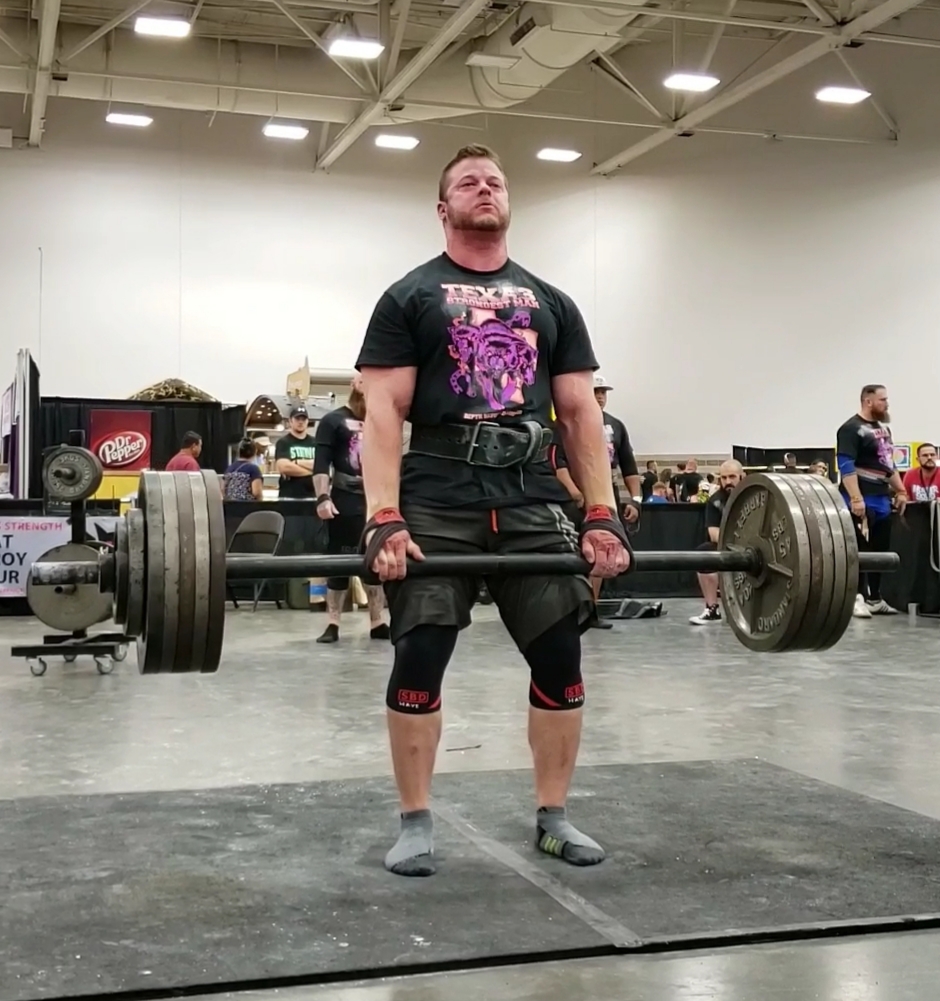 3rd event was the farmers walk. The weight for my division was 275lbs per hand and we had to carry it 50ft. The quickest time won the event. A lot of athletes struggled with the grip on the handles because they had been wrapped with tape and the tape was beginning to peel off. One of the guys in my division lost a fair amount of skin on his hand just trying to carry it. I managed 4th in this event. 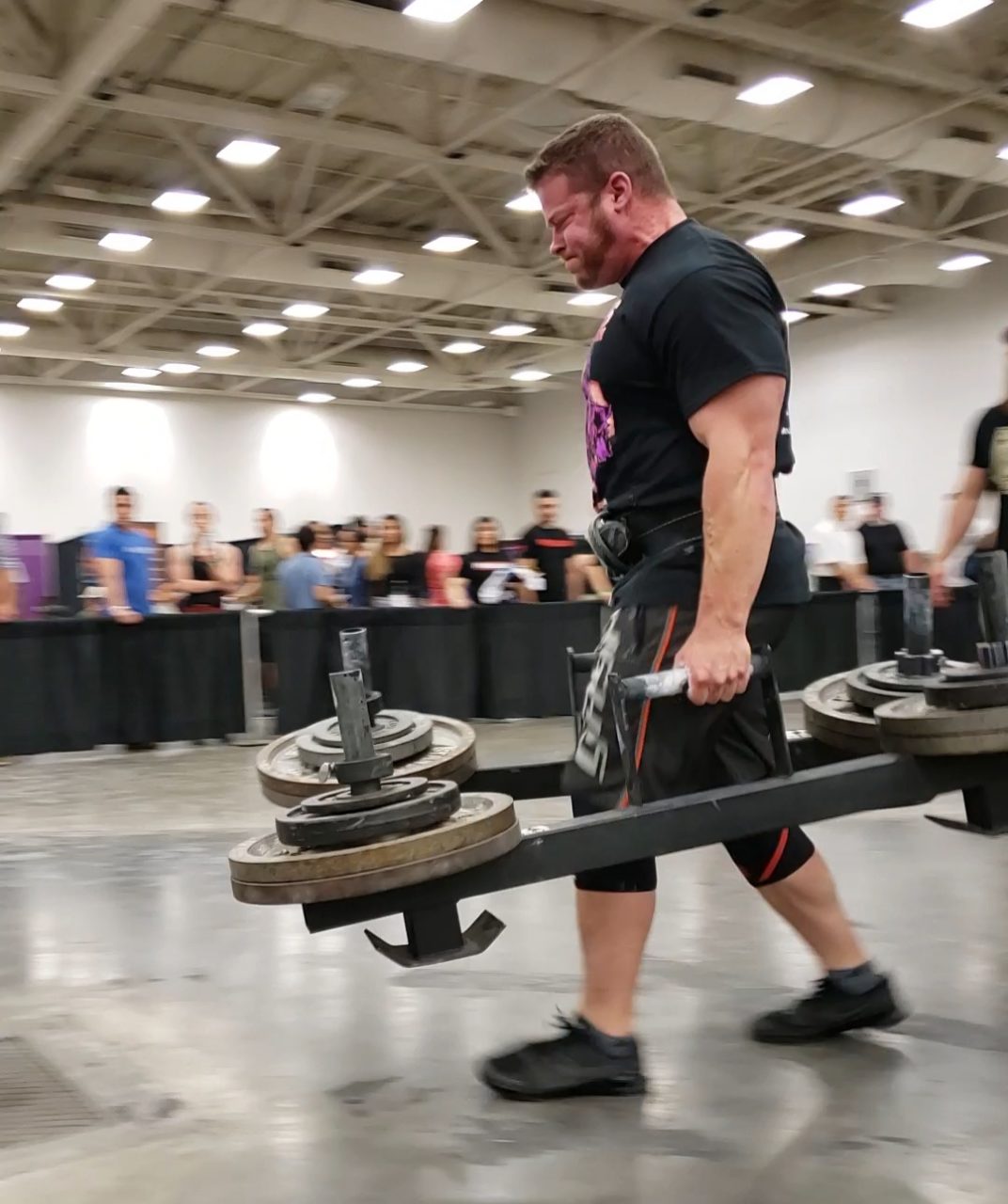 Moving events have been a weakness for me since I started strongman, but lately I’ve been devoting more time to training them so that I’m not losing so many points. The 4th event was the Mouser Block/sled drag medley. The block weighed 320lbs and you had to carry it 50ft and then pull a loaded sled back 50ft for the fastest time. The thing that competitors struggled the most with on this event was traction: The convention center floor was slick concrete, so pulling a sled backwards proved to be very difficult. Luckily, I’ve encountered this before at other comps and learned that if you dampen the soles of your shoes with water then you’ll be able to grip the ground better. This little trick paid off and I took 2nd in the event. 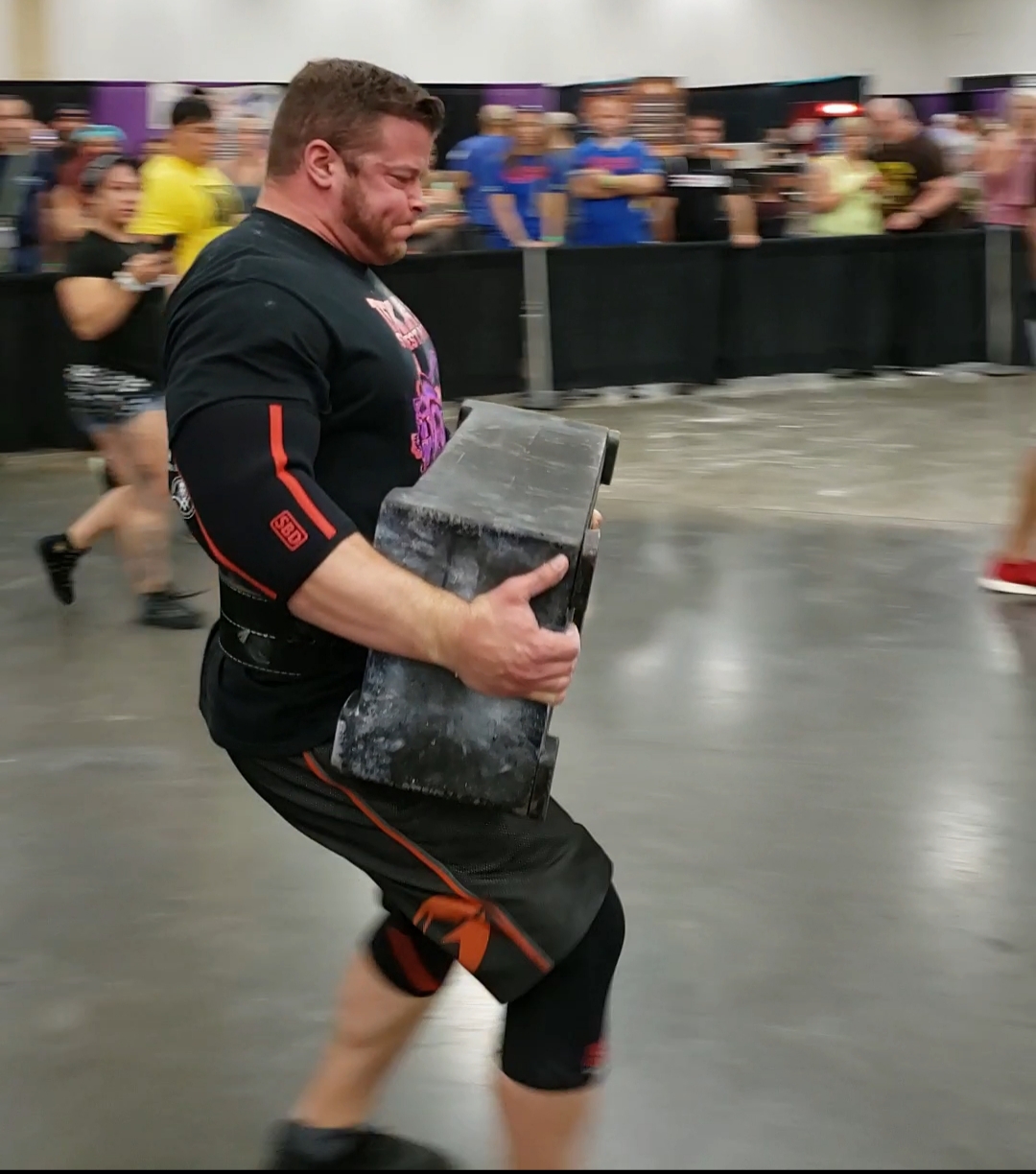 The last event was the sandbag carry for max distance. The sandbag weighed 250lbs. This event was brutal, especially being at the end of the day when your body is already fatigued, but I was ready. Sumner and I had been training this event with a keg, which is considerably harder to walk with for a long period of time than a sandbag. I believe training with the keg over the sandbag guaranteed me success on this event. I needed 225ft to win and I took it to 250ft and called it at that. 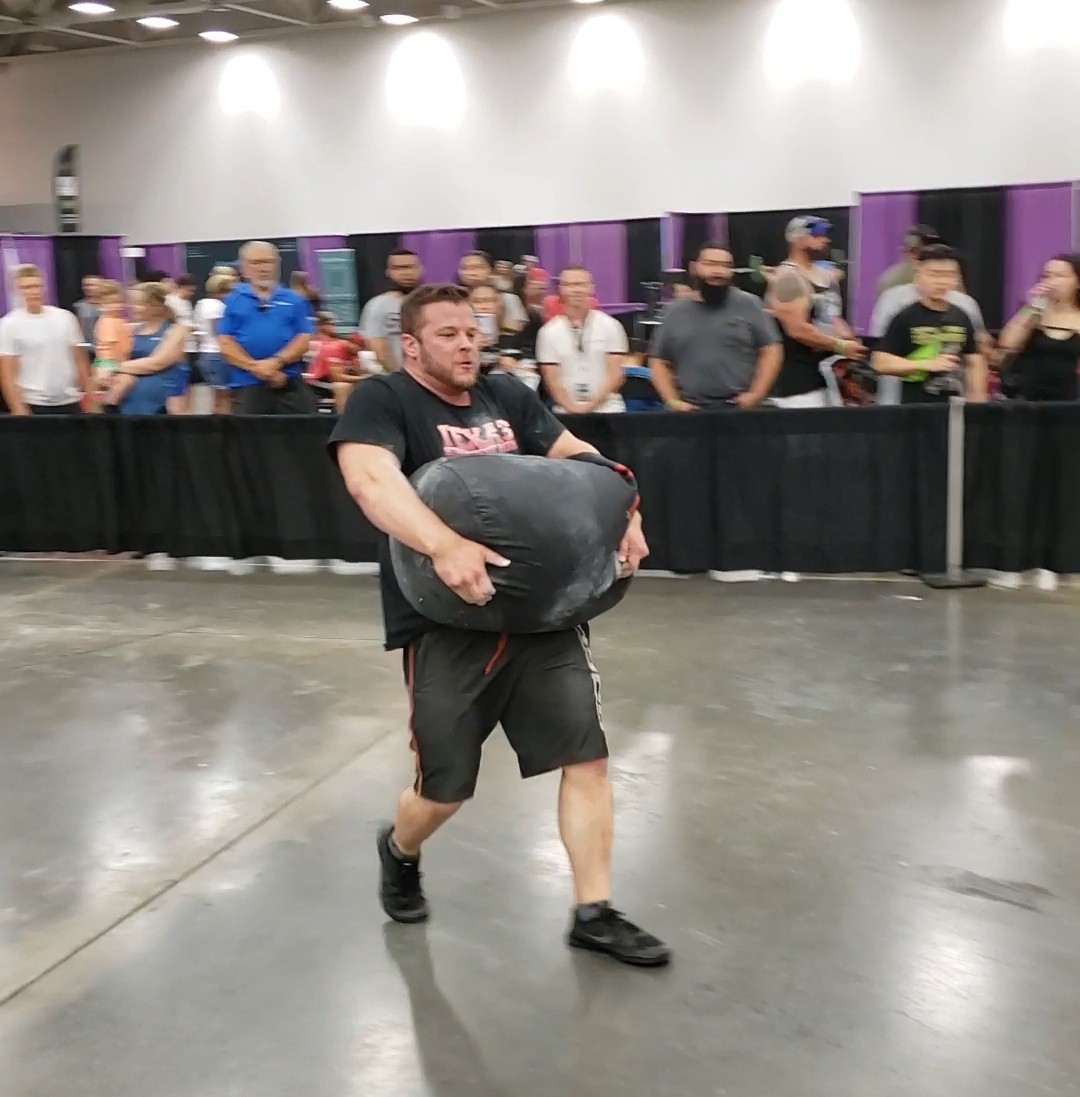 Your brother got the number 2 spot, how did you feel about that? Sumner came in 2nd in the heavy weight division (231lbs and above). I was 1st in the middle weight division (231lbs and under). I was very proud of Sumner for his placing. Believe it or not, he was the lightest heavyweight competing weighing in at 260lbs. He was trading 1st and 2nd with the guy that ended up winning all day long – it was great to see him hang with some of the strongest guys in Texas.   What did Mary (your wife) think of you all being together there? She loved it. It’s hard at times trying to juggle Jack or keep him from running on the floor during the competition, but overall I know she enjoys getting to make these memories as a family. 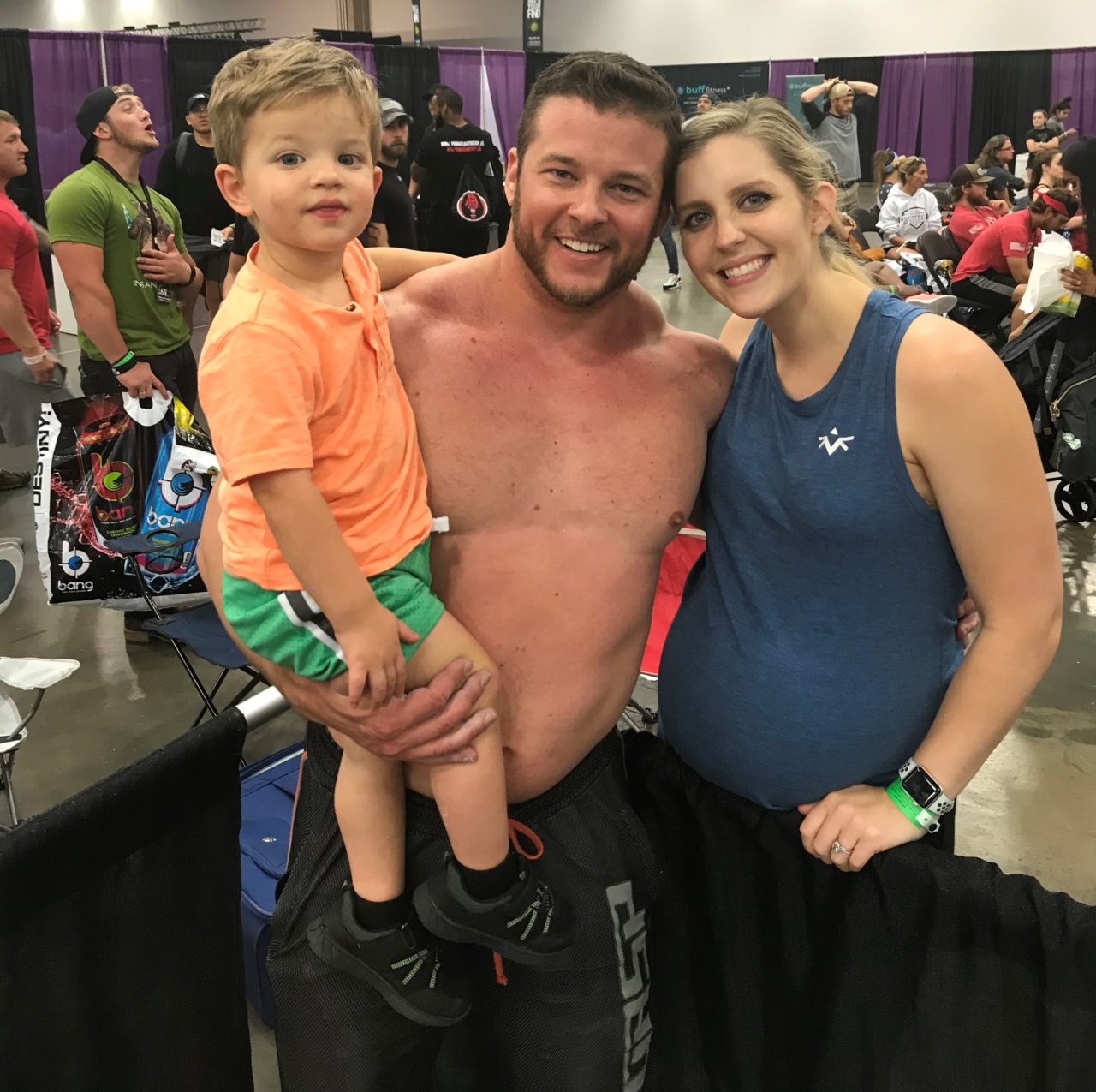 She deserves her own medal for being out there all day long when she’s 7 months pregnant, taking care of Jack, and making sure I’m eating, drinking, and stretching in-between events. She’s my secret weapon. Were there any other highlights to the event?  Yes! 1) Getting to have Jack out on the competition floor with me throughout the day. The best moment was when I was getting amped up for the last event and I hear my wife calling me from the sidelines and Jack’s holding out his fist to give me a fist bump before I went. I gave him a fist bump and said “we’re gonna win this.” 2) Standing up with the sandbag during the last event and realizing I had this competition in the bag (no pun intended).